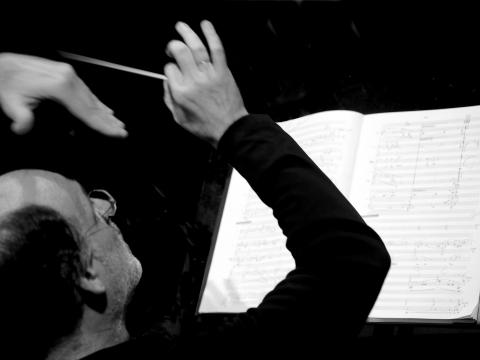 Prof. Walter Kobéra is one of the leading conductors working in the field of contemporary music theater. With numerous Austrian and world premières under his baton over the last few years, he has come to play an important and crucial role in shaping Viennese musical life. Kobéra has served as musical director of Neue Oper Wien since 1991 and as its overall director since 1993.

At the age of seven he began studying violin at Vienna City Conservatory. From 1978 to 2002 he was a member of the Tonkünstler-Orchestra Niederösterreich, where his activities also included work as a conductor and a musical assistant to Isaac Karabtchevsky and Fabio Luisi. In 1986 he founded his amadeus ensemble wien, which repertoire ranges from baroque sacred music to Viennese Classicism and on to symphonic music and opera – particularly that of the 20th and 21st century. His interpretations of Alban Berg’s “Lulu”, Benjamin Britten’s “Billy Bud”, Helmut Lachenmann’s “Das Mädchen mit den Schwefelhölzern” or Peter Eötvös’ “PARADISE RELOADED (LILITH)” (its première was dedicated to Walter Kobéra and the Neue Oper Wien) were enthusiastically received by critics and audiences alike.

His artistic work with KlangBogen Wien and the Vienna Festival goes back many years. 2005, under his leadership, saw the first guest appearance by Neue Oper Wien at the Nederlands KamerOpera Festival in Zwolle, where further guest appearances are planned. In 2006 the first appearance of Neue Oper Wien at the Bregenz Festival took place. He has led numerous concerts with Austrian and European symphony orchestras such as the Tonkünstler-Orchestra Niederösterreich, the Bruckner Orchestra Linz, the Gürzenich Orchestra Cologne, the Symphony Orchestra of the Hungarian Radio, the Wiener Concert-Verein and the ensemble die reihe. Alongside numerous concerts and opera performances, he also has CD and broad- cast recordings to his credit, with programmes including Brahms’ “Ein Deutsches Requiem”, Verdi’s “Macbeth”, Wolfram Wagner’s “Endlich Schluss” and Richard Dünser’s “Radek“. At the invitation of the Theater an der Wien Walter Kobéra conducted the premiere recording of Iain Bell’s “A Hidden Place” (with Diana Damrau) as well as the 2010 production of Kurt Weill’s “Die sieben Todsünden”. In December 2013 he celebrated his debut at the Cologne Opera.

Prof. Walter Kobéra teaches on the subject of modern music at the University of Music and Performing Arts Vienna and serves on the juries of several international vocal competitions.